These days most of us can’t live without our cellphone, and for this reason choosing the right wireless provider is incredibly important. While all providers want you to believe they are the best, a new report reveals that the one company that can actually boast about that with confidence is Verizon.

According to the report by Rootmetrics, Verizon Wireless is the overall top wireless provider for an eighth time, gets top marks in all categories tested including “overall performance,” “reliability,” “speed,” “data” and “call.” Overall, Verizon scored a 94.5 out of a possible 100, followed by AT&T with 92.9, Sprint with 87.9 and T-Mobile with an 86.5

Meanwhile, T-Mobile insists that the re-introduction of unlimited plans by AT&T and Verizon has resulted in slower download speeds for both carriers, but Rootmetrics tests prove that’s just not true. In fact, the report says that in the first half of the year all four carriers improved their network speeds in at least 20 markets. A rep for T-Mobile suggest that Rootmetrics is being paid by Verizon to give them glowing reports, while Rootmetrics claims T-Mobile’s data is flawed. 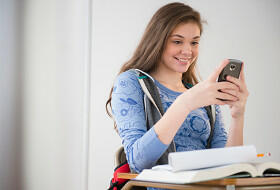